Vegan and travel are two words that, when combined, conjure up images of sad crudités and depressing salads—but not in New York. This city is a playground for vegan chefs, a place where they come to challenge the status quo and feed the masses every night. The cruelty-free path was paved over three decades ago by institutions like Angelica Kitchen and Candle 79—revolutionary restaurants that shaped the city’s culinary landscape, and taught the 212 to not just tolerate but crave vegan dishes. Thirty years later, the options for vegan restaurants in New York City are growing by the second.

From health food cafes to Michelin-starred fine dining, vegan-friendly food is popping up everywhere. While not every establishment on this list is 100% vegan, we can promise you won’t be disappointed with their animal-free fare.

Started by now-vegan restaurateur Ravi DeRossi, Avant Garden is a high-end, fully vegan restaurant that eschews fake meats to celebrate the natural flavours of vegetables. Chef Alex Aparicio, a Dovetail alum, manipulates legumes, herbs and nuts to create moreish dishes like Cauliflower with spinach, oyster mushrooms, dates and Vadouvan spices. The simple menu, divided into unassuming sections like ‘Cold’ and ‘Hot’, doesn’t have dish names because it’s not about the dish, it’s about the ingredients; ingredients like the creamiest avocados you’ll ever have.

What happens when a Michelin-starred chef and an editorial director form a restaurant? Nix happens. It’s quickly become one of the hottest vegan restaurants in New York City,  with its sexy, understated, and inherently chic ambience. This downtown favourite draws the crowds with unusual wines like Alsatian Chasselas, or an Edelzwicker from Oregon–each priced around USD$100 per bottle—and bold vegan and vegetarian dishes like Charred Brussels Sprouts with jerk spices, apple and mint (from the culinary genius of Chef John Fraser, the man behind omni-favourites Narcissa and Dovetail). Make a reservation well in advance, this place is packed out nightly.

This vegetarian and vegan eatery from award-winning French chef Jean-Georges Vongerichten and ABC Carpet and Home founder Paulette Cole offers up one of New York City’s best all-day brunching menus, along with comprehensive lunch and dinner options too. The plant-based, non-GMO, organic and sustainably sourced ingredients make up a menu of energising and nutritious smoothies and shakes, breakfast bowls, dosas, with noodles, rice and legumes available later in the day. Aiming to ‘inform and inspire a cultural shift’ towards conscious eating, this is one of our favourite wellness food spots in the city.

The preferred meal of millennials and celebrities alike, regular sushi is often tainted by environmental and health concerns. Cast those fears aside and tuck into a guilt-free meal of plant-based sushi at one of our favourite vegan restaurants in New York. Serving up nutrient-dense, cruelty-free rolls, wraps and even soups, Beyond Sushi has even been named one of the top 21 vegan restaurants in the country. Unusual combinations, like kaffir lime chips and avocado, or gobo and daikon, mean each tasty dish is bursting with flavours and colours. Don’t miss the Fun Guy Dumplings, the Nutty Buddy Wrap or the La Fiesta sushi.

Sloppy, messy, and a little bad ass, this all vegetarian and ‘accidentally vegan’ restaurant was founded by hardcore rocker-cum-chef Brooks Headley. Take one bite of the vegan Superiority Burger and see why GQ named it the best burger in the world. The diminutive size is an illusion – each nutty patty is about three inches thick, and piled high with crisp iceberg lettuce, juicy tomatoes and tangy dill pickles, so it’s definitely going to fill you up. But that doesn’t mean you can skip the sides. Get Griddled Yuba, or a Burnt Broccoli Salad with Eggplant, and Red Chile, or try and find the ‘sneaky avocado’ in the Romaine Salad. This place is the enigmatic bad-boy of squeaky-clean eating, so line up early if you want to get a seat as the queue forms around 6pm.

The second restaurant of the same name by Chef Amanda Cohen, Dirt Candy is lauded as another pioneer in the veggie-revolution, encouraging restaurants and chefs to promote vegetable-forward menus. With food as playful as its name, Dirt Candy is known for big flavours and artful plating.  Whipping up ‘naughty’ vegetarian dishes, Cohen doesn’t hold back with butter or cream (and she can work the hell out of a deep fryer) and yet, miraculously, her vegan dishes retain the same devilishly moreish taste. By treating vegetables like meats—pulling them, braising them, even jerking them–she highlights the complexity of each ingredient, teasing out their dynamic flavours. Dirt Candy now offer only set menus at dinner –  the five-course Vegetable Patch ($57), or The Vegetable Garden, nine to 10 courses ($83) – though they still offer an à la carte brunch menu. Start with the finger-licking Korean Fried Broccoli, and delve into the creamy Portobello mousse served with sautéed Asian pears and cherries for a bit of sweetness. No need to tip here: Cohen works tips into her menu so she can pay her team a fair, living wage.

A trendy cafe on the outskirts of Chinatown, Dimes has gained a reputation for its close-knit community and incredible health-conscious cuisine. Their menu doesn’t say a hard no to meat, but with so many delicious vegetarian and vegan dishes to choose, their carnivore-pleasers are more of an after-thought. The fresh artsy aesthetic has made it a favourite with a young creative crowd as well as those popping in after their morning yoga session.

Balance your um and yang, and escape bustling midtown at this upscale Korean sanctuary. Settle into the tatami table, and let the tranquil zen music do its job as the kitchen creates vegan dish after vegan dish of moreish delights. Come hungry so you can sample something from each section, like organic Leak Pancakes, spicy Stuffed Shiitake Mushrooms and sweet and savoury Fragrant Bamboo Rice. This is one of those restaurants you can bring the most devout carnivores to enjoy. Stay for dessert: the Silken Tofu Chocolate Pudding is heavenly.

Boasting one Michelin star, this shojin-style restaurant is a great place to experience beautiful vegan cuisine, with each dish presented like a piece of art. Shojin cuisine, a type of vegetarian cooking, originated from Zen Buddhism and is the foundation all Japanese food (particularly kaiseki, the Japanese ‘haute cuisine’). The menu here changes monthly so dishes always highlight the most seasonal ingredients and each one is plated faultlessly under the watchful eye of Executive Chef Hiroki Odo. Dishes such as House-Made Oboro Tofu and freshly made Soba Noodles are served on traditional Japanese pottery, some created over 200 years ago. An impressive tea and sake menu is available to enhance the experience.

No visit to New York is complete without a bite of the city’s most iconic food: pizza. Enter Double Zero, an organic, vegan pizzeria serving up wood-fired pies with a plethora of tasty, innovative combinations that will let you experience the city without any of the guilt. Check out the Smoked Oyster Mushroom pizza topped with walnut cream, green harissa and lemon. The short and sweet selection of ‘Not Pizza’ dishes are especially tempting, with dishes like the crunchy and creamy Sweet Potato Bruschetta topped with smoked almond ricotta and fried sage. They even have an artisanal plate of handcrafted, vegan cheeses. Grab a glass of organic wine, snag a seat at one of the communal tables, and hang out in Italian heaven.

Serving up some of the city’s most craveable brunch options—looking at you Banana Bread French Toast–Sacred Chow is a kosher hotspot for vegans and their omni-friends throughout the city. Besides the indulgent brunch dishes, they serve up a mean Nama Gori Kale Caesar Salad, with the soy strips lightly grilled for a delicious smoky flavour. The tapas are a bit of cult favourite, with guests happily queuing up to get their hands on Mama’s No-Soy Meatballs and waffle-like Root Vegetable Latkes. Founded by a former legal aid lawyer and close to Washington Square Park, this convenient and cosy spot has an ethos as good as its food making it an enduring favourite among the best vegan restaurants in New York.

And for more informal vegan dining…

If you’re more into seeing the sights than chowing down, you’ve got plenty of vegan fast-food options too. Stop by Taïm for some world famous falafel, or pop into one of the many Eat by Chloe restaurants, founded by Cupcake Wars winner Chloe Coscarelli. Our New York Fashion Week favourite finds for customisable vegan food on the go are Sweetgreens and Dr Smood. The Butchers Daughter, a ‘vegetable slaughterhouse’ with Pinterest-perfect interiors is another great place to grab a quick bite, and of course, there’s always a Blossom nearby. We can’t leave out Eataly’s La Verdure, a vegetable-centric restaurant in the heart of Mario Batali’s mammoth Eataly–the largest Italian marketplace in the world: though not strictly vegan or vegetarian, it has special menus designed for both and is a great place to bring foodies (vegan and omnivores alike) to feast on fresh produce and ogle at the plethora of imported treats. 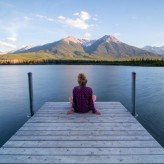 A flexitarian foodie and avid traveller, States-born Hong Kong-based Caitlin is the girl in the know about the 852's latest happenings. She'll take spas over sprints, but Caitlin doesn't sit still for long as she finds her zen on mountain hikes or doing yoga beachside.